here did my love of theatre and words come from? My mother. She’d deliberately use long words and make me guess what they meant or use the dictionary. She took me to lunchtime performances of Shakespeare comedies in the Peacock when I was nine but I also vividly remember seeing Mike Leigh’s play Abigail’s Party among other ‘Plays for Today’ on telly, and I was memorising tracts of Merchant of Venice at eight so the bug was definitely planted in one form or the other.

All I knew was that I wanted to be a writer as early as I can remember but by the time I was a teenager, I passionately wanted to write for theatre. I wrote my first stage play in 1983, the summer I finished school. I set it in a single sex convent school – ‘write what you know’! – and it had a huge cast of about 40 characters; all with ‘deep’ descriptions such as Alison, a bitch. I thought it was two hours long. When I found it decades later, I realised it was about 15 minutes, but still with this enormous cast! But it got me started. Year after year, I wrote more plays and I wrote constantly – experimenting with style and ideas. I was passionate about Albee, Pinter, Mamet, Chekov, Shakespeare, Bennett, Ionesco, Beckett…I read every play I could see or get my hands on.

What did change my life though was finally going to drama classes. I enrolled in Betty Anne Norton’s as soon as I finished school in 1983 and it was like a drug. I also got confidence from it that I’d never had before. I realised I could walk into a room of strangers and while I’d have previously fled, now I knew I could start talking to one person and I’d be alright.

For years, I hung out with actors I got to know at that time, and auditioned here and there. So those years were a heady mix of theatre, cast parties, writing, all while I did my degree. I helped found the drama soc in DCU (then NIHED) and directed my first play (Zigger Zagger by Peter Terson) with help from John O’Brien. We had three rehearsals running concurrently for three months; he was there for the first two and taught me so much. The magic when you see an actor grow into a part or the blocking begins to work and the whole begins to form. I put on a radio play and then was invited back to do a play of my own after I left.

Then two of my plays were put on by Larry Lowry and Anthony Brophy in the International Bar, then a couple won prizes in Cork Arts Theatre. One went on to be staged in the Focus, the other to have a reading in the Abbey and so on. There was a gap while I worked fulltime as a screenwriter but in 2013 I had a play in Collaborations at Smock Alley, another in Derry, another in Theatre Upstairs, back then to the International Bar, a bit of a tour in the West and London for one. And a radio play for BBC4. But for every play that has been staged, there has been heartbreak trying to get others off the ground. It doesn’t seem to get easier.

What is it about theatre that is so magical and life-affirming? It’s the immediacy, the wonderful buzz that gets under your skin when an actor interprets your story, your words and brings them to life, when an audience gives it a standing ovation or can’t stop talking about it afterwards. That’s why I keep coming back to it.

While I’m writing, the characters become more real to me than the people I live with. Some plays even come from a voice talking to me (generally at 2 in the morning) and are more like dictation – the hard work comes afterwards, structuring the narrative. Others come to me piecemeal, from an idea that I play with or an image I can’t get out of my head.

I have one I’m writing at the moment called Mr Moonthief that opens with a man pulling the moon on stage with a long string believing it’s the only way he can get his girlfriend back. Then there’s Benjamin which is about a mother who gradually becomes imprisoned by her son, but deliberately tries to reinterpret the (metaphorical) bars as they’re put up.

You bring worlds to life when you write and stage a play. You take people away from what they know and let them live somewhere else for 30 minutes, 70, 100 minutes. There has to be humour and humanity there or they don’t work. The characters have to be compelling and there should be so much more under the surface than there appears to be at first. For me, I lose myself in the words and imagination and come out the other end with a play I’m excited about but also want to work with the right cast.

The difficulty for me, having been on the edge of the business for so many years, is finding producers. I have produced three plays but it’s far too difficult. Writing is what I adore and I love directing but I know many plays need someone to come from outside it. 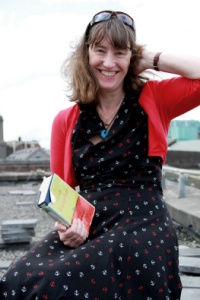 Lindsay J. Sedgwick is a playwright, screen-writer and novelist.