From Tipp to New York by John Keating

s a fella from Tipperary who’s shambled around New York stages as an actor for well over 20 years, a number of instances come to mind in which I would say wholeheartedly that theatre makes life better, but one especially comes to mind.

A few years ago, I was cast in a play in the City. Rehearsals began in the dead of winter and it was a long rehearsal, about 5 weeks. I knew an older colleague in the play wasn’t well, he had, a few years previously, fallen victim to a long term and very debilitating disease. His physical mobility had been significantly compromised but he had in our rehearsals clearly found ways to use his physical discomfort to his advantage in terms of movement and stance.  He is a brilliant actor and his instincts are ridiculously good and continued to be as we began previews.

The problem, as we began performances, was that it was hard for him to time his large medication dosages, especially for 2 show days. So he never really knew if his memory would fail him on any given show, drowsiness was and is a big potential side effect of his medication. But as an actor, he could only know this by testing it out in the real world of 8 shows a week. This could vary from a line here or there to occasionally having to improvise the entire sense of a scene, not the easiest in a play in verse!  Sometimes it was just he and I onstage. My initial reaction in the first scene of our (packed to the rafters) first performance was to panic. Silence followed by silence followed by both of us picking our way through the debris of the scene! But what began to strike me in the second scene, in a gradually huge way, was the bravery of my colleague, my friend. He got up there every time for 8 shows a week for 6 weeks and yes, sometimes it would be rocky, but it was much more often magnificent to watch him and be onstage with him and his bravery. That courage of never truly being sure if the next line would come, but facing it moment to moment, is the most inspiring thing I’ve seen onstage and on a very short list of the most amazing things I’ve seen in my life.

Being in that play with him made my life better, it made me a bit less afraid of anything that might come, on or off stage, and it made me determined to let the chips fall where they may as much as I can in my life. 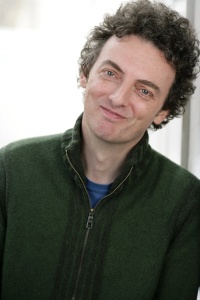 John Keating is a New York-based Irish actor and award-winning audiobook narrator, whose credits range from 11 shows at the Irish Rep to HBO’s “John Adams.”