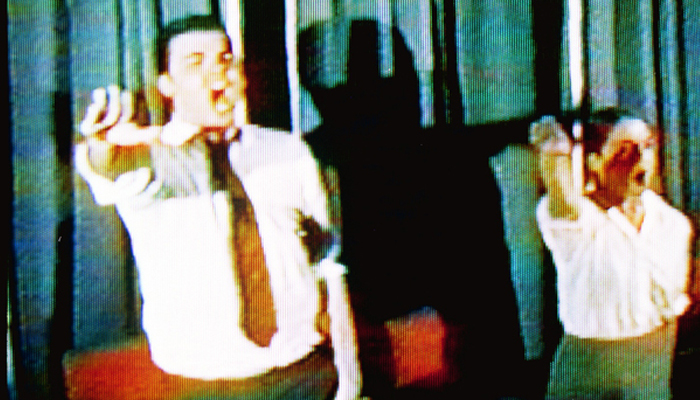 remember seeing Wreck the Airline Barrier by the Riot Group at the Edinburgh Fringe in 1999.

The tiny, black-walled airless room at the old (and now sadly defunct) Garage Theatre. The audience crammed in. The air hot and thick. I was perched on a radiator at the back of the room – a prime position because it was higher than the makeshift rake of seats in front and gave me a view of the whole stage. The heat unbearable.

I remember the quivering tension of the three performers and the ritualistic strangeness of the opening of the show – “come here salvon, come near salvon” – and their utter conviction as they sucked us into the black vortex of their alternative universe, where three alienated business travellers and the crew of an airplane hurtled towards the catastrophe of their final aircrash.

The jolt when the three of them leapt to their feet and gave the audience the nazi salute.

The end, where, after being almost still for the entire show, just voices and the occasional gesture, the cast utterly wrecked the stage as a powerful strobe jump-cut their movement, shattering the picture they had built up over the previous 50 minutes into vicious shards.

But most of all I remember the feeling afterwards, of having witnessed a revelation, an awakening, of feeling that there were more possibilities in the world, that all the limits that I felt could be overthrown, and that this, this revolution, could be done through theatre.

Ewan Downie is an actor, theatre-maker and Artistic Director of Company of Wolves.